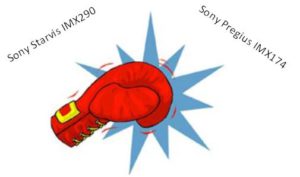 Sony has continued to improve image sensors, first with the debut of the Pregius sensors and now with the low light sensitive Starvis sensors.  The Starvis sensors are slowing being released by camera manufacturers and IDS Imaging is the first to release them in the new LE USB3.1 models.

These new sensors are being released at an astonishing rate, which is great for the imaging market, but making it harder to make decisions in identifying the best sensor for an application.

We have put two more sensors into the boxing ring to battle it out and see how they fair in various categorizes.  In this contest, we put the Pregius IMX174 (and essentially its sibling, the IMX249) and the new Sony Starvis series, specificly the 2.1MP IMX290 in the ring.

The Sony Starvis has become very interesting in applications that require very low light sensitivity and are attractive due to the back side illuminated architecture.  As seen in the diagram below, the metal wiring has been set behind the photo diode and decreasing the distance light has to travel.  This new pixel design lends itself to improved sensitivity. 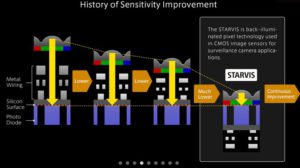 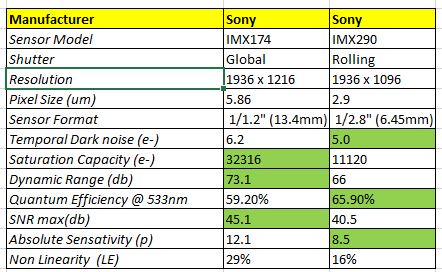 Round 1 –  Sensitivity:  Absolute sensitivity is a great way to identify low light performance.  Using the “Absolute sensitivity” figures above, we see that the IMX290 sensor takes less photons to register the smallest detectable amount of light.  In this round, we see that the IMX290 has a lower value of 8.5 vs 12.1 (less photon’s needed) lending itself to the winner in this round for best low light sensitivity.   In essence, we can start to form an image in lower light with the IMX290.

Round 2 – Quantum efficiency (QE):  QE is the ability to turn photon’s into electrons at given wavelengths.  In this round, we see that the IMX290 has a better efficiency of 65.9% vs 59.2% in converting photons into a charge again winning the round.  This means more signal is provided for that given wavelength, creating a brighter image.

Round 3 – Saturation Capacity:  This value is essentially the size of the pixel well measured in electrons.  The larger the well, the better is can drown out noise and not saturate quickly.  The IMX174 excelled in this round.   In turn, you see the dynamic range is higher at 73% vs 66%.  In cases where you would like to see the brights and the darks in a scene, higher dynamic range is desired.

Conclusion:  In the end, its really a draw between the two sensors.  In the 2MP range of these sensors, it really depends on your application!

If you need low light sensativity, the Sony Starvis family of sensors excel due to the pixel architecture.  You’ll find the Sony Starvis currently in the IDS LE3.1 model cameras in the following cameras with 2 and 6 MP resolutions with more on the roadmap.

Interested in the EMVA1288 Data?  IDS can provide this data upon request, email me (jonc@1stvision.com) if you are interested in receiving the data for one of the cameras.

Please do not hesitate to Contact us!  1st Vision can provide a complete solution including cameras, lenses, lighting and cables.  We have over 100 years of combined experience we can put to work for you!