Sony has added the new 5MP, 2/3″ IMX250  image sensors to the portfolio which has proliferated into many industrial camera designs.  Sensitivity on this sensor has even surpassed the popular Pregius 5.86um pixel formats by 1.1X with a smaller pixel allowing the format to be reduced to a 2/3″ format.

We know this information can be baffling so we we have put the two sensors in the ring to battle out the specifications!

View all cameras using the Sony Pregius sensors and learn more about this technology
From the specification standpoint, the IMX250 knocks out the ICX625 in a few rounds.  The key attributes are battled out below.

Although the pixel sizes are the same, the new CMOS pixel wells have a saturation capacity of ~ 10.3K electrons compared to 5.9K for the ICX625.  This contributes to increased dynamic range allowing images to not saturate quickly, allowing more dark and bright areas to be viewed. 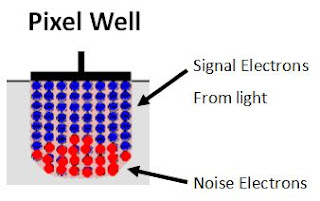 In general, the more electrons in the pixel well along with low noise provides better signal to noise ratios.  As shown in the graphic, we ideally want a lot of signal electrons vs the noise electrons.

Sensitivity can be measured looking at the number of photons required to have a signal equal to the noise level.  A lower number of electronics are better indicating higher sensitivity.  Quantum efficiency measures the percentage of photons converted to electronics at a given wavelength.  In comparing the sensitivity thresholds, it takes ~ 4 electrons to gain a signal versus 22 comparing the IMX250 vs ICX625 making it much more sensitive.  Reviewing the quantum efficiency at 525nm, further supports this with a higher percentage of photons being converted on the new CMOS sensor with 76% vs 57%.  Its a knockout in round 3!

.. And the winner is… the Sony IMX250 CMOS sensor!  This comparison shows excellent gains in technology with this 5MP sensor!   If you are using the ICX625 sensor, the IMX250 is a drop in replacement allowing you to keep the optics, gain better performance and drop the price of your camera substantially!

Several camera manufacturers have the new Sony Pregius IMX250 5MP sensor in their lineup and more on the horizon.  Links to the current cameras as follows listed by interface.

As a note, the IMX250 is the faster sensor vs its counterpart, the IMX264.  Both of these sensors have essentially the same performance, but speed and price are lower with the IMX264.  In many cases, you will see both sensors within a camera product line, but the IMX264 sensor will be at a lower price.

Cameras in the current lineup are as follows:

This is the second of our sensor battles!  See our comparison and learn how the Sony IMX174 (and its counterpart the IMX249) compare against a CMOSIS 2MP sensor!


See our previous battle comparing the Sony 2.3MP IMX174 with CMOSIS CMV2000 2MP sensors.
Please do not hesitate to Contact us!  1st Vision can provide a complete solution including cameras, lenses, lighting and cables.   We are happy to discuss the differences along with pros and cons of the various sensors and cameras.