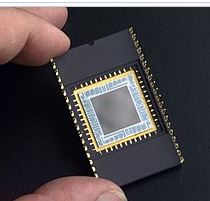 Spatial resolution is determined by the number of pixels in a CMOS or CCD sensor array.  While generally speaking “more is better”, what really matters is slightly more complex than that.  One needs to know enough about the dimensions and characteristics of the real-world scene at which a camera is directed; and one must know about the smallest feature(s) to be detected.

The sensor-coverage fit of a lens is also relevant.  As is the optical quality of the lens.  Lighting also impacts the quality of the image. Yada yada.

But independent of lens and lighting, a key guideline is that each minimal real-world feature to be detected should appear in a 3×3 pixel grid in the image.  So if the real-world scene is X by Y meters, and the smallest feature to be detected is A by B centimeters, assuming the lens is matched to the sensor and the scene, it’s just a math problem to determine the number of pixels required on the sensor.

There is a comprehensive treatment how to calculate resolution in this short article, including a link there to a resolution calculator. Understanding these concepts will help you to design an imaging system that has enough capacity to solve your application, while not over-engineering a solution – enough is enough.

Finally, the above guideline is for monochrome imaging, which to the surprise of newcomers to the field of machine vision, is often more better than color, for effective and cost-efficient outcomes.  Certainly some applications are dependent upon color.  The guideline for color imaging is that the minimal feature should occupy a 6×6 pixel grid.

If you’d like someone to double-check your calculations, or to prepare the calculations for you, and to recommend sensor, camera and optics, and/or software, the sales engineers at 1stVision have the expertise to support you. Give us some brief idea of your application and we will contact you to discuss camera options.

1st Vision’s sales engineers have an average of 20 years experience to assist in your camera selection.  Representing the largest portfolio of industry leading brands in imaging components, we can help you design the optimal vision solution for your application.

1st Vision is the most experienced distributor in the U.S. of machine vision cameras, lenses, frame grabbers, cables, lighting, and software in the industry. 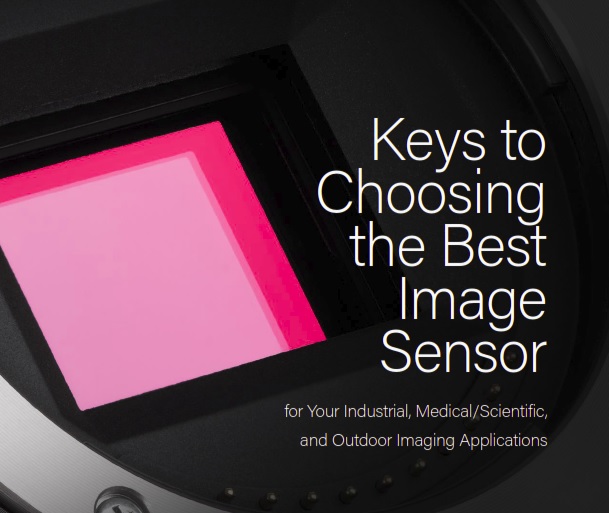 Image sensors are the key component of any camera and vision system.  This blog summarizes the key concepts of a tech brief addressing concepts essential to sensor performance relative to imaging applications. For a comprehensive analysis of the parameters, you may read the full tech brief.

While there are many aspects to consider, here we outline 6 key parameters:

For a more in depth review of these concepts, including helpful images and diagrams, please download the tech brief.

1st Vision’s sales engineers have an average of 20 years experience to assist in your camera selection.  Representing the largest portfolio of industry leading brands in imaging components, we can help you design the optimal vision solution for your application. 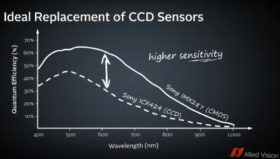 Industrial machine vision cameras historically have used CCD image sensors, but there is a transition in the industrial imaging marketplace to move to CMOS imagers. Why is this?.. Sony who is the primary supplier of image sensors announced in 2015 it will stop making CCD image sensors and is already past its last time buy. The market was nervous at first until we experienced the new CMOS image sensor designs. The latest Sony Pregius Image sensors provide increased performance with lower cost making it compelling to make changes to systems using older CCD image sensors.

What is the difference between CCD and CMOS image sensors in machine vision cameras?

Both produce an image by taking light energy (photons) and convert them into an electrical charge, but the process is done very differently.

In CCD image sensors, each pixel collects light, but then is moved across the circuit via current through vertical and horizontal shift registers. The light level is then sampled in the read out circuitry. Essentially its a bucket brigade to move the pixel information around which takes time and power.

In CMOS sensors, each pixel has the read out circuitry located at the photosensitive site. The analog to digital circuit samples the information very quickly and eliminates artifacts such as smear and blooming. The pixel architecture has also radically changed moving the photosensitive electronics to be more efficient in collecting light.

There are many advantages of CMOS versus CCDs and outlined below:
1 – Higher Sensitivity due to the latest pixel architecture which is beneficial in lower light applications.
2 – Lower dark noise will contribute to a higher fidelity image.
3 – Pixel well depth (saturation capacity) is improved providing higher dynamic range.
4 – Lower Power consumption. This becomes important as lower heat dissipation equals a cooler camera and less noise.
5 – Lower cost! – 5 Megapixel cameras used to cost ~ $2500 and only achieve 15 fps and now cost ~ $450 with increased frame rates.
6 – Smaller pixels reduce the sensor format decreasing the lens cost.

1stVision can help in the transition starting with crossing over CCDs to CMOS using the following cross reference chart. Once identified, use the camera selector and select the sensor from the pull down menu. 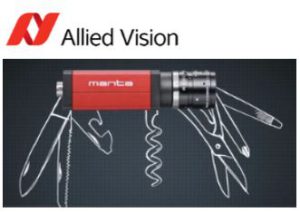 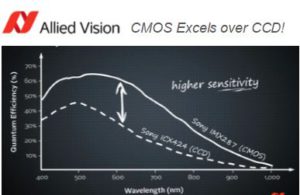 CMOS Image sensors used in machine vision industrial cameras are now the image sensor of choice!  But why is this?

Allied Vision conducted a nice comparison between CCD and CMOS cameras showing the advantages in the latest Manta cameras.

Until recently, CCD was generally recommended for better image quality with the following properties:

Where in the past, CMOS image sensors were used due to existing advantages: 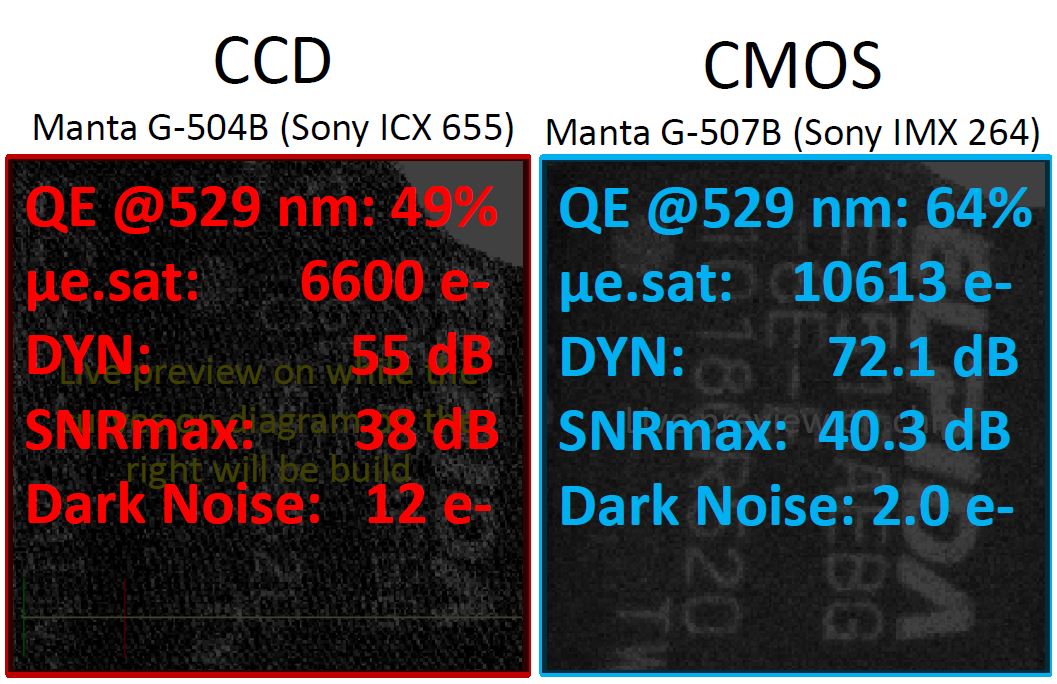 Comparing the specifications between CCD and CMOS  industrial cameras, the advantages are clear.

Current CMOS image sensors eliminate several artifacts and provide more useful images for processing.  The images below are an example of a PCB with LEDs illuminated imaged with a CCD vs CMOS industrial camera

CMOS images will result in less blooming of bright areas (LED’s for example in the image), smearing (vertical lines seen in the CCD image) and lower noise (as seen in the darker areas, providing higher overall contrast)

CMOS image sensor manufacturers are also working to design sensors that easily replace CCD sensors making for an easy transition which results in lower cost and better performance.  Allied Vision has several new cameras replacing current CCD’s with more to come!  Below are a few popular cameras / image sensors that have been recently crossed over to CMOS image sensors

Sony ICX424 (1/3″sensor), can also be replaced by the Sony IMX287 (1/2.9″ sensor) with pixel sizes of 6.9um closely matching the older IMX424 having 7.4um pixels.  Allied Vision Manta G-040 is a nice solution with all the benefits of the latest CMOS image sensor technology.  View the short videos below for the highlights.

What are the attributes to consider when selecting a camera and its performance?