PoE - Power over Ethernet
Everything you want to know about PoE

Recently, several camera manufacturers have updated their GigE cameras to either have PoE (Power Over Ethernet) as a standard or optional interface. This paper explains why you'd want to use PoE, why you would not want to use PoE, and how to use PoE.

What is PoE (Power over Ethernet)?

The obvious advantage of PoE is that you only need a single cable from the Ethernet source to the camera!

How do I power my PoE camera?

As seen from the diagram below, there are really only a few ways to power your camera. 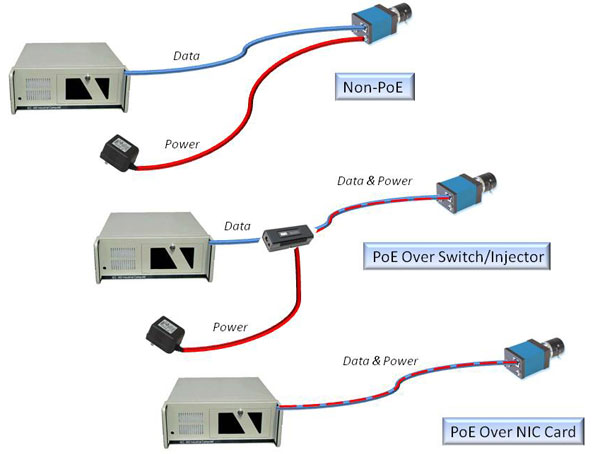 Powering your camera with a Direct Power Source

The top method is to put power into your camera directly on a separate line from your data. Clearly, this is NOT PoE! However, you can power PoE cameras independently of the data line. You can also put power in via the hirose connector AND from a PoE source. This is not recommended, but the camera can handle it. It will probably run hotter and noisier. If you are going to power the camera directly, and are using a PoE camera that costs more for the PoE option, it's probably not a good idea to get this option.

Powering the camera via a PoE switch or PoE Injector

If you have a PoE switch with the appropriate characteristics needed to optimally use GigE cameras, this is a very simple way to power and use your PoE camera. Plug the camera into the switch, then the switch into your regular NIC card. You are good to go! Don't have a switch? You can also use a PoE injector. This is a small device that has 2 RJ45 jacks, and an input for power from a wall wort. You plug a cat5e cable from you NIC card to the injector, and from the other end of the injector you plug a second cat 5e cable to the camera. The second cable has the data and the power on it.

There are many PoE injectors with varying characteristics. Unless you get the proper one, it will not work with a GigEvision camera, or won't work optimally with it. We carry one PoE injector that GigE camera manufacturers have tested and OK'd.

PoE with a NIC

As of right now, there is only company that makes a NIC with PoE. This is a dual NIC card with Intel PRO1000 chipsets, so it is optimized for GigE cameras. (See link on connecting GigE cameras.) This card is attractively priced when compared to an Intel Dual Port NIC and 2 power supplies to power the cameras. If you only have a single camera, it is more cost effective to use an injector or a regular power supply.

Why not use PoE?

There is cost associated with PoE. PoE switches cost more than a standard GigE switch. The same is true with PoE Ethernet cards. Right now, there is only 1 card available, and it is pricey for single camera applications. Second, PoE cameras have to dissipate more power. They must take a high voltage input and convert it to useable camera voltages. This means more electronics inside the camera (and again, more cost) which produces more heat. However, The biggest reason not to use PoE is if you are already using the hirose connector on the camera for IO (strobe, trigger, etc). If you already have an extra set of wires coming out of the camera, the hirose connector has the power input on it. You might as well just put power in at that point.

Not all PoE is the same!

Be careful. There are several PoE specs. Not all will work well or work at all with GigE cameras! The same is true with injectors. If you are not sure what you are looking at, we suggest you contact 1stVision to discuss your needs. We have products that will work optimally